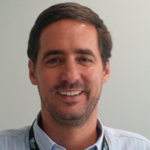 He is in charge of the company’s strategy for Asia where he is looking to increase the number of local End-Users, App Developers, White-Label Partners and Payment Methods. Besides leading the Singaporean office, Tiago has also responsibilities over the Shenzhen office.