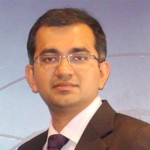 Jayesh Easwaramony is leading the InMobi business in Asia Pacific, Middle East and Africa. Prior to his current position, he has led business development for the Asia Pacific region for three years.

Before InMobi, Jayesh worked with Frost and Sullivan as the leader of its TMT practice. He has advised several large companies in the mobile and media space including Samsung, SKT, Axiata and Telkom. He was widely respected for his views on the ICT industry having provided several interviews to CNBC, BBC, Channel News Asia and leading publications. He has spoken at several conferences including GMIC, LTE Asia and Carrier Ethernet World. Prior to Frost and Sullivan, Jayesh has worked with Newscorp in India to set-up their pay TV business and other media investments and with the prestigious Tata Group to enter the telecom business.